Walking our Way to Higher Productivity 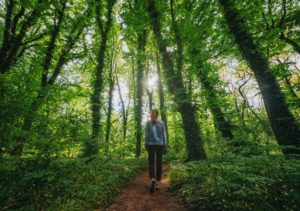 What happens if we make time for an hour outside each day?
Does it matter where we go, and how can we see the value in spending more time outside in any already, busy work schedule?

With a name like ‘Active’ you might assume that we are a team that likes to exercise to keep our brains fresh and alert. You would be right. Many studies have shown that exercise improves the human ability to think and remember things, particularly as we age. The average American, for example, spends about 90% of their life indoors. When we are busy at work, distracted by technology and online team meetings, it is often easy to forget to take a micro break or to go for a wander outside.

Spending Time in Nature
The idea that nature is good for us has been gaining ground since the 1980s. Taking a break away from a screen is beneficial. In fact, research shows that taking micro breaks in nature can boost engagement at work, improve productivity levels and that gorgeous natural light can deliver you a much needed shot of vitamin D.

Lisa Nisbet, associate professor in the psychology department at Canada’s Trent University. “There’s also a lot of work on the psychological benefits of being in nature – on wellbeing and on cognitive functioning. In general people are happier in nature. Happiness is a very broad concept and so we measure things like positive and negative emotions, people’s sense of vitality and being energised and how satisfied they are with life,” she says. “When people are immersed in natural places, even in urban nature, people tend to have more positive emotions and vitality than when they are indoors.”

A study in Finland examined how lunch-hour activities helped workers to rebound from job stress, suggesting that a short ‘nature hit’ can boost performance. Researchers asked some people to walk for fifteen minutes in the park and others to do indoor relaxation exercises for two weeks in spring and autumn, while a control group continued with lunchbreaks as normal. The results in the autumn intervention were interesting. “To our surprise, these park walks were as effective and as beneficial as these relaxation exercises,” says Kalevi Korpela, professor of psychology at Finland’s Tampere University. The park-walking group felt more relaxed and detached from work and enjoyed the break more. “The relaxation group experienced only an increase in their feelings of relaxation.” Both groups showed higher levels of concentration and lower strain in the afternoon. Both activities, the study concluded, “may assist employees in replenishing the resources needed to perform well on the job during the working day”.

How Walking Improves our Brains
A new study shows that white matter, which connects and supports the cells in our brains, remodels itself when people become more physically active. In those who remain sedentary, on the other hand, white matter tends to fray and shrink. The findings underscore the dynamism of our brains and how they constantly transform themselves — for better and worse — in response to how we live and move.

Agnieszka Burzynska, a professor of neuroscience and human development at Colorado State University in Fort Collins says that it was likely that white matter possessed as much plasticity as its gray counterpart and could refashion itself, especially if people began to move. She and her graduate student Andrea Mendez Colmenares set out to make over people’s white matter. They began by gathering almost 250 older men and women who were sedentary but otherwise healthy. At the lab, they tested these volunteers’ current aerobic fitness and cognitive skills and measured the health and function of their white matter, using a sophisticated form of MRI brain scan.
Then they divided the volunteers into groups, one of which began a supervised program of stretching and balance training three times a week, to serve as an active control. Another started walking together three times a week, briskly, for about forty minutes. And the final group took up dancing, meeting three times a week to learn and practice line dances and group choreography. All of the groups trained for six months, then returned to the lab to repeat the tests from the study’s start.

And, for many, their bodies and brains had changed, the scientists found. The walkers and dancers were aerobically fitter, as expected. Even more important, their white matter seemed renewed. In the new scans, the nerve fibers in certain portions of their brains looked larger, and any tissue lesions had shrunk. These desirable alterations were most prevalent among the walkers, who also performed better on memory tests now. The dancers, in general, did not. Meanwhile, the members of the control group, who had not exercised, showed declining white matter health after the six months, with greater thinning and tattering of their axons and falling cognitive scores.
This proves that a few brisk walks every week can go a long way in starving off memory loss and helps to boost productivity during your working day. The Active Digital team are now twelve months into their ‘Get Active’ program. A purpose-built program, created and funded by Active Digital. The program gives our employees a wealth of information, exercises and videos prepared by Strength and Conditioning coach, Simon Reynolds. Simon commented; “To stay healthy, adults should try to be active every-day and aim to achieve at least 150-minutes of physical activity over a week through a variety of activities”.
His program includes: –
• Specialist educational videos
• Performance model components
• Mindset techniques
• Nutrition information including recipe of the month
• Movement of the week
• Daily Goals

Walking and Talking
Now is the time to enjoy those benefits of more walk and talk meetings Research has shown that act of walking leads to increases in creative thinking. This certainly supports the usefulness of walking meetings. Furthermore, the costs associated with regularly participating in walking meetings are next to nothing. Keep in mind that walking meetings are not breaks from work. They are meetings that would have taken place regardless of whether they were held in someone’s office or while walking around your office complex. There may be no cheaper way to achieve moderate increases in creativity and engagement.

Encouraging more walking doesn’t have to happen overnight but introducing regular, short walks into your week gives more exposure for it to become a regular, healthy habit in your life. It is about introducing nature into your working week and maximising the benefits. It’s clear to see that seeking out natural settings amid the concrete of modern life is well worth doing and now is the best time to start.

The Get Active Program will soon be available as an ‘off the shelf’ IOS app for any organisation to purchase and provide to their own employees.