Research shows a slow start back to the office

According to latest research based on crowd movement data based on connections; London travel is still as little as half what it was pre-pandemic. The data was captured by O2 Motion to the O2 network between 6th–24th September, showing that commuter trips into the city are busiest on Thursdays, O2 Motion looks at connections to O2 mobile masts to gain a picture of crowd movement trends around the UK* – was collected from the City of London for three weeks this September. 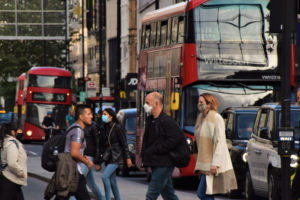 It revealed just over 160,000 journeys into the city were made on the first Tuesday back after the school holidays (7th September). This is less than half the amount recorded before the pandemic, when just under 350,000 journeys were recorded on a comparative Tuesday in February 2020. The trend has continued throughout September, with data for the last three weeks showing a slight increase to the number of journeys to the city, but this remains considerably lower than pre-pandemic levels.

Previously, the busiest day for the city was Tuesday, according to data measured in February 2020; but now Thursday is emerging as the most popular day to head into the office, suggesting workers are taking advantage of meeting face to face with colleagues without interrupting the weekend.
Over 200,000 journeys were recorded in the City on Thursday 23rd September (compared to around 130,000 on the next day), highlighting that for many the office is becoming a social hub; a refreshing break from virtual calls and an opportunity for in-person socialising both during and after work hours.
The O2 Motion data shows that crowd volume in the city is significantly reduced on Mondays and gradually increases throughout the week, peaking on Thursday and then falling again on Friday. Interestingly, at the weekend, crowd volume in the City of London is back to pre-pandemic levels, highlighting how much workers have embraced flexible working. This supports the findings of recent research from Virgin Media O2 Business and the Centre for Economics and Business Research (Cebr), which shows employees now expect to work remotely for 2.5 days per week, with company leaders in broad agreement: expecting their employees to work remotely for 2.3 days a week.

Feedback from commuters confirms the social draw of being back in the office. Ami Wilson, who works in Farringdon, says: “After nearly two years of being at home, it’s great to be back in the office and seeing colleagues again! I’ve been going back to the office steadily over the past month, but the last few weeks are the busiest I’ve seen in a long time. I’ll be in the office for two days a week from now on; probably Tuesday and Thursday as it splits the week up. 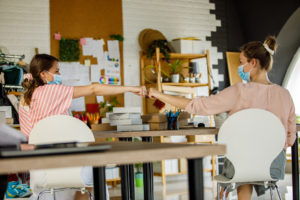 Footfall has risen in Central London locations by between 10-25% week on week recently. We have seen more customers returning to the city and other busy areas including London Wall, Victoria, and Oxford Street. It is great to see the city spring back to life. Customers are showing confidence in returning to London and many are happy to be back in the office. Our teams are excited to see many of their regular customers again who work in the area, delivering great experiences and creating face to face connections.”

Chris Wroe, Head of Data and Analytics at O2 Business, says: “It’s clear from the data that where they can, London commuters are adopting a true hybrid approach to work, and it’s encouraging to hear the early effect this is having in other areas, like retail. As well as impacting the way we eat and shop in city locations, understanding changing commuting patterns is key to planning office spaces and everyday services like transport – so we expect data insights like these to play an important role as we build back better.”