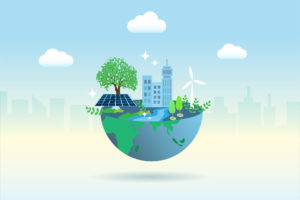 Many businesses have not set targets for reducing greenhouse gas emissions. Slashing emissions is difficult. Businesses must reliably measure how much carbon dioxide and other greenhouse gases they are responsible for. Then companies have to find cleaner energy sources without hurting their operations. Where they can’t find cleaner substitutes, businesses often pay others to reduce emissions or remove carbon from the atmosphere. The task gets even harder when companies begin the process of reducing so-called Scope 3 emissions — pollution caused by suppliers and customers.

Technology companies like Google and Microsoft, which run power-hungry data centers, have slashed emissions, but even they are finding that the technology often doesn’t yet exist to carry out their big objectives. However, they are challenging themselves to consider how they can be part of the solution in fighting climate change, setting ambitious targets to reduce the carbon emissions produced by their organizations and supply chains. Tech companies have deep pockets and overall, they are making good progress. Below we have listed five tech companies who are working hard to make a difference and in doing so, we have pulled out some highlights to share.

Google wants all its operations to be consistently powered by energy sources that do not release greenhouse gases by 2030, but that could be difficult to achieve because the output of wind and solar farms is still small in some countries.

Furthermore, Microsoft wants to be “carbon negative” by 2030 even including Scope 3 emissions. That goal will almost certainly require extracting carbon dioxide from the atmosphere. Those technologies are nascent and could be very expensive. “If we are going to achieve a net-zero carbon economy for real, we will need everyone to act,” said Lucas Joppa, Microsoft’s chief environmental officer. “And that means action can’t be voluntary. We need requirements and standards that everyone is expected to meet.”

AT&T
AT&T has committed to be carbon neutral across its global operations by 2035, and it sees six initiatives as the key to achieving that goal:
• Virtualization of many network functions
• Transitioning to a low-emissions fleet
• Accelerating energy efficiency and network optimization efforts
• Expanding sustainable feature film and TV production
• Supporting the renewable energy marketplace
• Investing in carbon offsets

Google
Google’s vision for the feature is one that is carbon-free, and Google and Alphabet CEO Sundar Pichai announced in 2020 that Google had eliminated its carbon legacy through purchasing carbon offsets.
Its next sustainability goal is running Google’s business on carbon-free energy everywhere, starting with their data centers and campuses. Outside its own business, Google is working toward achieving its carbon-free vision with a variety of initiatives:
• Helping enable 5 GW of new carbon-free energy through investment by 2030
• Helping more than 500 cities reduce 1 gigaton of carbon emissions annually by 2030
• Helping partners and organizations reduce their carbon usage and remove carbon from the atmosphere
• Through tools and information, help 1 billion people make more sustainable choices by 2022

Microsoft
Microsoft is upping the ante with its environmental goals, aiming to be carbon negative by 2030 and, by 2050, have removed from the environment all the carbon the company has emitted since it was founded.
Microsoft’s approach is guided by seven principles:
• Grounding in science and math
• Taking responsibility for their carbon footprint
• Investing in carbon reduction and removal technology
• Empowering customers
• Ensuring transparency
• Advocating for carbon-related public policy initiatives
• Enlisting their employees in advancing innovation