Everything We Expect to See in 2022 and Beyond 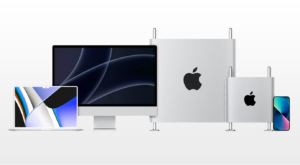 Here at Active HQ, we do our best to update you on new Apple products that might be on the horizon. For now, these are just rumours but we as usual, we hope to hear more in September 2022. here’s a round up of what we have heard according to Macrumors.

The Apple Watch Series 8 could get new health features that include temperature sensing, and sleep apnea detection, and more advanced features like blood glucose monitoring and blood pressure measurements are a possibility, though may not be coming until a later date. The Series 8 could include car crash detection, and there is expected to be a rugged model that will better hold up to extreme usage. Along with the Series 8, we’re expecting an Apple Watch SE to come at the same time.

Apple is working on an updated version of the Mac Pro that could feature an Apple silicon chip with up to 40 compute cores and 128 graphics cores, which would be double the performance of the M1 Ultra in the Mac Studio. We’re not expecting design changes for the Mac Pro, and the update will see Apple completing its transition to Apple silicon across the Mac lineup. Design changes are not expected.

Apple is apparently building a high-end version of the Mac mini, which will feature additional ports and a more powerful Apple silicon chip. It’s expected to use M1 Pro and M1 Max chips, and it could have a fresh design. There’s no concrete word on when it might be released.

Apple is also apparently working on a new version of the AirPods Pro with a more compact design and a new wireless chip. The design is said to eliminate the short stem that sticks out from the bottom, resulting in a more rounded shape closer in design to competing wire-free earbuds from Google and Samsung.

You can find out more about which cookies we are using or switch them off in settings.